Sometimes it is others that have the brilliant idea and you're just called along to witness the excellence. To protect identities here we shall call those involved, the Instigator, the Contact, the Muscle and the Witness.

It was a cold dark night and here I was, an innocent Witness, having some quiet drinks at the Contact's house with a few mates, the Muscle included. Now as luck would have it the Contact was in the bathroom when his cell phone rang. It was the Instigator. I knew the Instigator from many previous missions, some good and some bad and so I answered the phone. It was this simple event that changed my life drastically as that was how I was to become the Witness. The Contact came back into the room at that moment and I handed the phone over to him, not knowing what the call was about. After he hung up he asked me,

"You keen for a mission tomorrow?"

"Uh yeah, what is it?" I asked apprehensively.

"We're painting Blobby on a lighthouse" he replied. "But don't worry its getting painted on Monday anyway so it won't be vandalism."

So we drunk more and were merry. I had thoughts of painting a pink and yellow spotted Blobby figure on the side of the lighthouse, the Pencarrow lighthouse, I had never even been there before, nor did I know where it was but it sounded like fun.

So Monday was Queen's Birthday, a holiday and I was up early in anticipation of a mission, not really knowing at all what was involved. I got a call from the Contact informing me that he was a little hung over and the mission was to be postponed till around lunch time.

So later on that fateful day, the Contact picked me and the Muscle up and we headed out to Eastbourne. We had arranged to meet the Instigator at the end of the road there, where we were cycle round to the Pencarrow lighthouse.

Not long after we got there the Instigator turned up looking pleased with himself. He had found pink and yellow paint on special that day, fate was indeed with us. I must state here that the entire plan was the master idea of the Instigator, none other would be so daring as to even suggest such a stunt nor to pull it off. We three, the Contact, the Muscle & I didn't really know what we were in for as the Instigator brought out paint, brushes, pencils and a roller on a long stick for reaching those hard to get to places. He was prepared. In fact he had done a scouting mission the day before with his hired goons to find that very conveniently scaffolding had been placed around the lighthouse in preparation for its painting. He knew then that the mission had to go ahead that weekend. 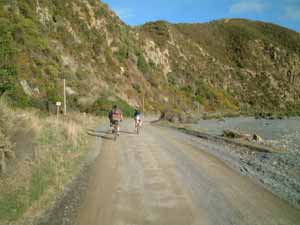 So we set out with high spirits on this fine day and began the slow hung over cycle out to the lighthouse. 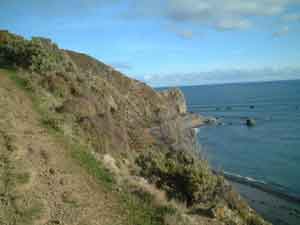 It was a grueling trip, we cycled around seas, over mountains, through scorching hot and freezing cold (or maybe that was just the hangover effects) but anyway, finally in the far distance we saw for the first time our target, the Pencarrow Lighthouse, standing out atop the hill in all its unpainted glory. 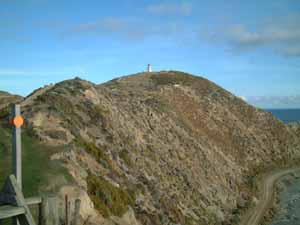 The Pencarrow Lighthouse from afar.

We cycled up to it to find a number of people already there. Doh! So we loitered round, pretending to catch our breath and enjoying the fine view. After a while they left and we began to suss out the situation. 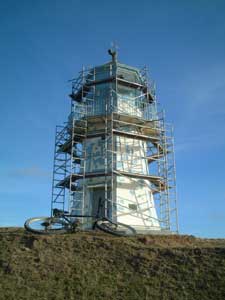 The lighthouse just waiting to be painted.

And there it was, fully sanded and scaffolded, just crying out to be painted a bright pink with yellow poker dots. We couldn't have asked for a better setup. Apparently the painters had been camping out in the top of the lighthouse, waiting to start painting on Tuesday. Luckily they were away on Monday, but were they going to get the surprise of their lives when they came back.

So we began. I was given the job of penciling in the circles. We had a paint lid to trace around but this was too small so I drew them all free hand. This only took about 10 mins so while the others were just beginning painting I climbed up the scaffolding and kept look out. I could see the last group of people walking off round the corner in the distance but nobody else was coming which was good. The adrenaline was beginning to kick in, but we were professionals, we had a deadline to work to and we worked hard. 20 minutes into the job and we had almost finished the bottom half. We were only painting three of the six sides of the lighthouse so that from one side it would look fully painted. We had two paint brushes to draw the finer edges around the circles and one roller to reach high and paint quickly the majority of the pink. At one stage the ferry came through. We decided it was wise to hide round the back of the lighthouse for 5 minutes while it passed us by, not that I think they could have identified us from that distance. 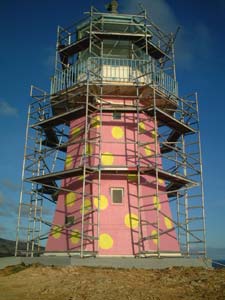 Looking stunning in its final colour of pink and yellow poker dots the Blobby Lighthouse was truly a work of art. Never in my wildest dreams had I ever imagined I would have been a part of this, but truly it was beautiful. We stepped back to admire our work and clocked ourselves in at 50mins all up. Not bad for our first time, I'm sure we could improve with practice though.

One thing that you're probably wondering though is this, Who was the true master mind behind all this? It couldn't have really been the Instigator, he's not all that smart, and the goons he brought along, they didn't even know why they were there. Maybe this next photo will help shed some light on this... 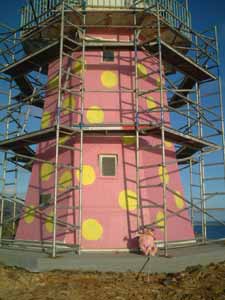 The true mastermind behind it all - Blobby.

And so it was done. I said "Let us leave this place" and we did. Covered in splatters of paint, tired from our ordeal, we cycled back to the car park. The Instigator cleverly brought an ice-cream, handing over his hard earned coins with pink paint splattered hands. I think we got away with it though. What a rush...

An article appeared on the www.stuff.co.nz site about how the Pencarrow lighthouse had been found by the surprised painters on Tuesday to be all painted up like Blobby. They found it quite funny saying it couldn't have been vandals as they had done quite a professional job of it and it must about taken about 2-3 hours. Yeah baby, we were good. That night it was also on the channel 3 news, they even did a fly by in the helicopter past it, that's how important it was. Everyone that heard about it thought it was really funny. It got painted over pretty fast, as they were going to paint over it anyway and I reckon it just created good publicity for the lighthouse, I didn't even know where it was till that day. Some people even reckon it should have stayed that colour!

And so ended the legacy of the Blobby Lighthouse. I can now say I have a great tale to tell my grandchildren and many a night I fall asleep with a big smile on my face picturing how those painters must have looked when they found the thing. I shall never forget the day of the Pencarrow Lighthouse mission. 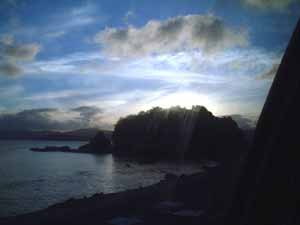 The day of the Pencarrow Lighthouse Mission.